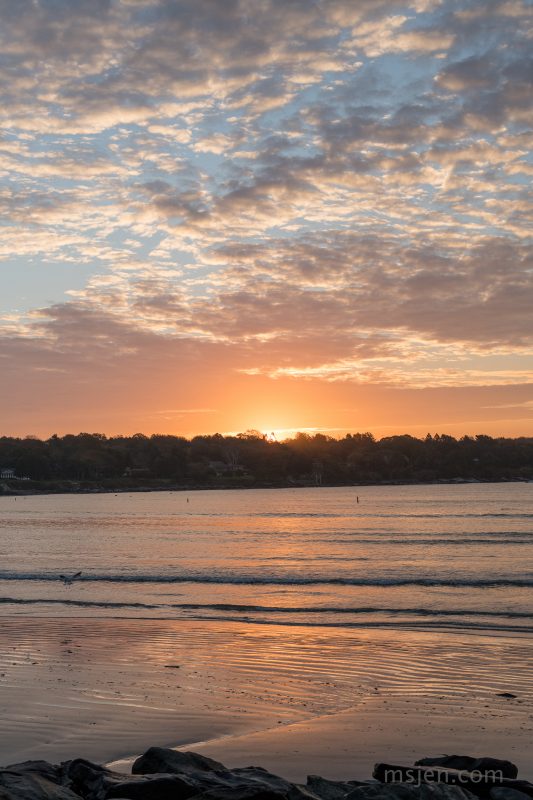 Thurs. 11.01.18 – To a person who is not yet on East Coast Daylight time, but instead still three hours behind in Pacific Daylight time, waking up at 6:40am in Rhode Island to be out at Mackerel Cove beach to photograph the sunrise and dogs running free at low tide was a bit of a difficult thing to do – though it was well worth it.

The air was cold, 30-something degrees fahrenheit – hat, gloves, and a jacket were needed. The sun rose slowly, with the first pink light reflections on the wet low tide line at 6:50am. For the next twenty or so minutes, Sparky the black lab ran happily after her ball while Kenji the island dog poked along the high tide kelp piles for edibles, as the clouds lying low in packed cotton ball formation in the eastern sky turned from gray to pink to neon pink-orange-yellow to the sun rising over the trees and houses on the east side of the cove. From 6:50am to 7:18am, it was magical.

Sherman Alexie on Not Being “The Kind of Indian That’s Expected” : On what it means for Trump to treat the entire country like a reservation — and writing a memoir about a great woman who was not a great mother.

If Republicans Love Their Country, When Will They Show It?

From the nice folks at Volcanoe Cafe: Rockall: The lost continent of Middle Earth

The Archetypes of American Folklore – wherein most of the American archetypes are bigger, faster, bolder, and more of braggarts then those of the old country.

The Handmaid’s Tale is a warning to Conservative Women:
“America is rich in Serena Joys…The world she wanted to build could not coexist with the world that allowed her career.”

The Exquisitely English (and Amazingly Lucrative) World of London Clerks : It’s a Dickensian profession that can still pay upwards of $650,000 per year.

How do we know where the carbon is coming from?
I found the part on Carbon-14 cycle most interesting – given that there was spike in C14 in the 1950s-1960s due to above ground nuclear bomb testing. And then the amount of C13 can tell us where the added CO2 in the atmosphere is coming from: