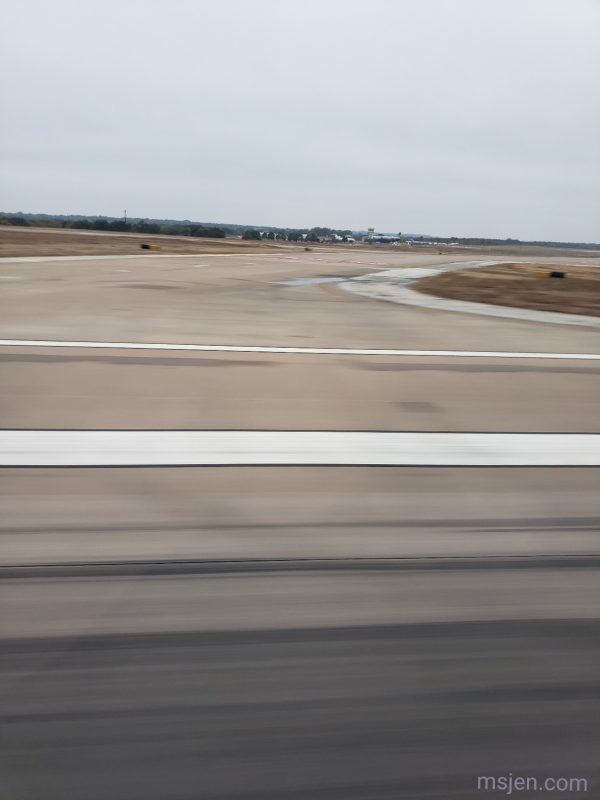 Fri. 11.08.19 – More and more, due to software algorithms, it is hard to get a phone’s camera to achieve a satisfying blur or nightscape. All the recent camera phones want to make dark scenes light and blurred scenes sharp.

Thus, when I am able to get the Samsung in a quick snapshot to achieve a nice blur, as in the airplane skidmarks turned into continuous black lines in the photo above at landing yesterday, it makes me happy. 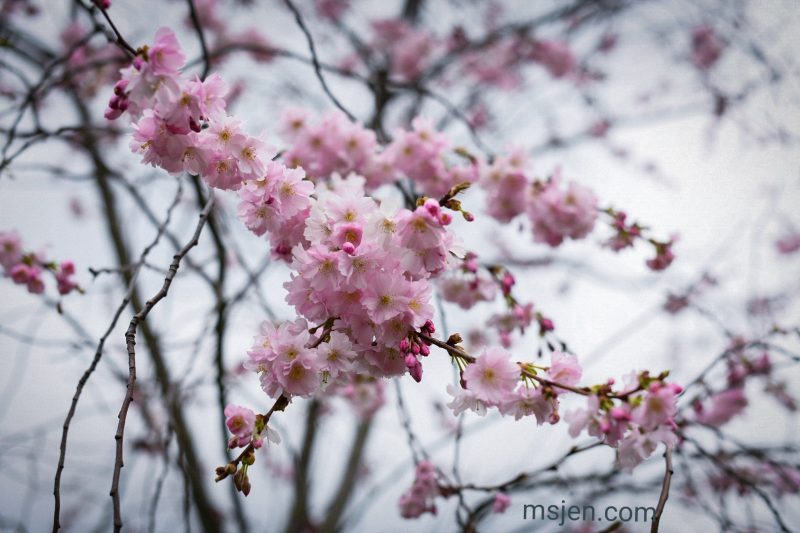 Tues. 08.28.18 – Photo above is from my Nikon D850’s memory card from early April in Kensington Gardens. I used Snapbridge to transfer the photo via wifi to my phone, did a wee bit of editing on the phone, and am now posting it to this blog. 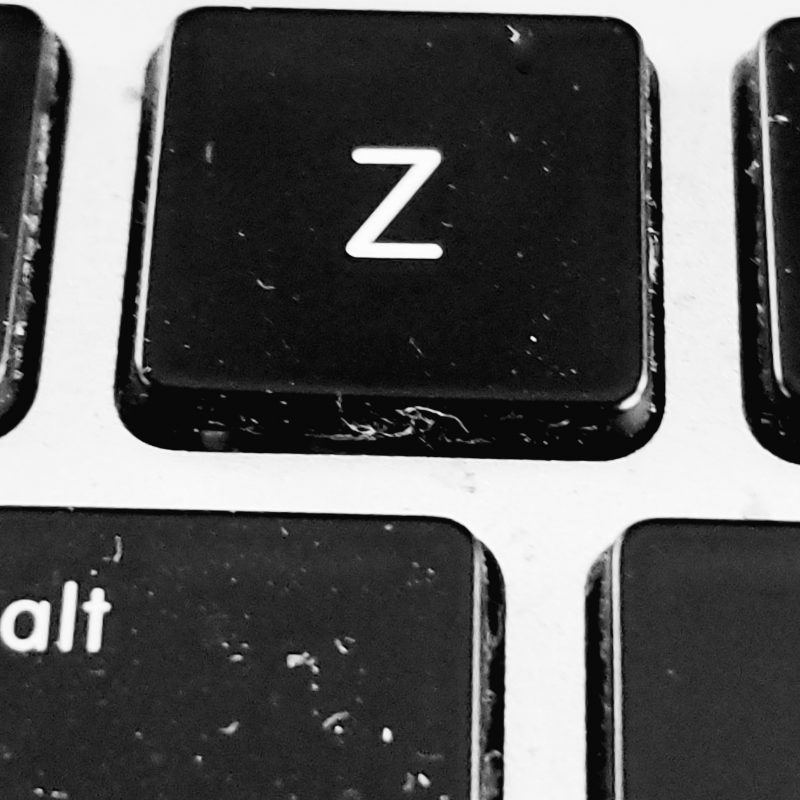 11.04.19 – Update for posterity or triggering my own memory: The new era was my (then) brand new Samsung Note 9, after 19 years of using Nokia or Microsoft/Nokia phones. 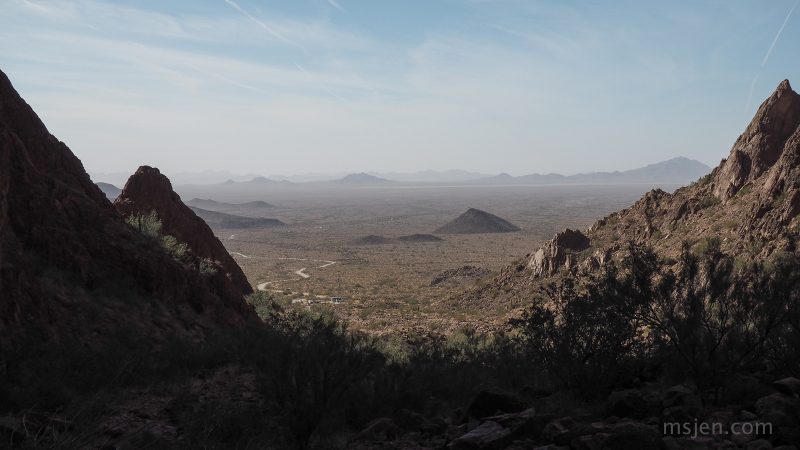 Feb. 12, 2018 – I am finding that the differences between the photos that my camera phone, the Lumia 950, and the new Olympus micro 4/3rds Pen E-PL8 mirrorless camera are both evident and very subtle.

As my previous post states, I had hoped to replace a camera phone photo practice with a very small mirrorless camera with interchangeable lenses. The transition is coming along in fits and starts.

The immediate difference between the two example photos taken yesterday while on a hike to Palm Canyon in the Kofa National Wildlife Refuge is the way that the cameras handle color. The Lumia 950 is rather famous for its yellow-tinted take on the world and the Olympus Pen E-PL8 for its lack of neon saturation.

My eyes have become so used to the vivid to neon saturation that most camera phones produce that the subtler colors and tones of the Olympus Pen appear almost desaturated (top photo) until I look at the Pen’s photo carefully – wherein a world of beautiful tones opens up – esp. at the dusty horizon. 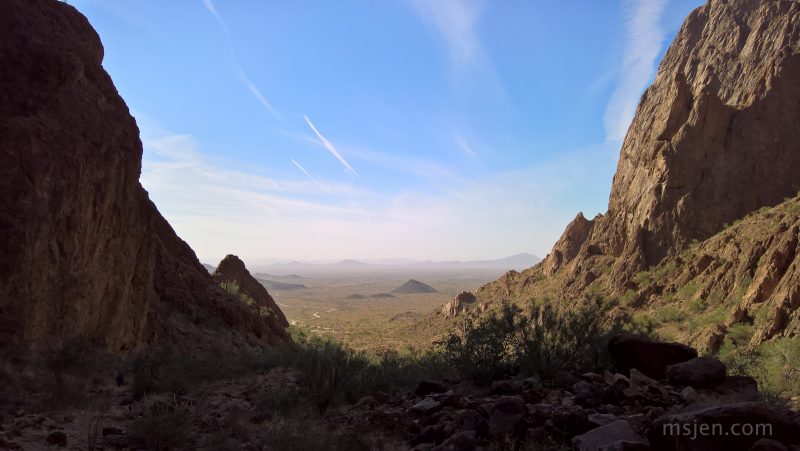 In the Lumia 950 photo (directly above), the sky, plants and rocks are much more cheerful in color and the horizon is just a few volcanic cones peeping up from the dusty, windy day.

What do you think? Photo taken by Ms. Jen with a Lumia 950 camera phone.

Hello, ASUS Zenfone Zoom, you may be the size of a wheelbarrow, but that Hoya lens system of yours with optical zoom is intriguing. I will wait for Gavin to take lots of photos and write his review before I wonder much farther…

Look what we have here. #Asus #Zenfone #Zoom pic.twitter.com/GC01HjAzcD Sun 01.10.16 – Last night, after 2 years and some odd months of faithful service as my primary camera phone, my Nokia Lumia 1020 leapt out of my hand and on to the concrete floor committing screen harikari.

For a variety of reasons, of which I will blog about later this week, I am not going to rush to order a new LCD screen and install it, nor am I going to rush to use my AT&T upgrade to get the new Windows Lumia 950.

When the timing is right, I will get a new camera phone that will be smaller than the Lumia 1020, it will have a camera strap hook, and it will have a dedicated camera button. While most folks consider the Lumia 1020 to be small as smartphones go, for me it was more than a touch too wide and too deep, which is why my very small hands would lose grip on it.

Until which time I can buy a new phone, I will retire the spider webbed Nokia Lumia 1020 and return my beloved and faithful Nokia 808 back to daily, primary usage.

A few Tweets on the subject:

Fare the well as a daily primary mobile device… You were a good camera phone: https://t.co/694uSUR8QW #Lumia #microsoftsnaps

Yes, folks, I want a COMPACT mobile phone. F*>< all the Giganto-need-a-wheelbarrow-to-carry-it-around phones, I want to go small.

Not everyone has the hands of a basketball player. The last 24hrs with my old school Nokia 808 Pureview reminded me how much I like small.