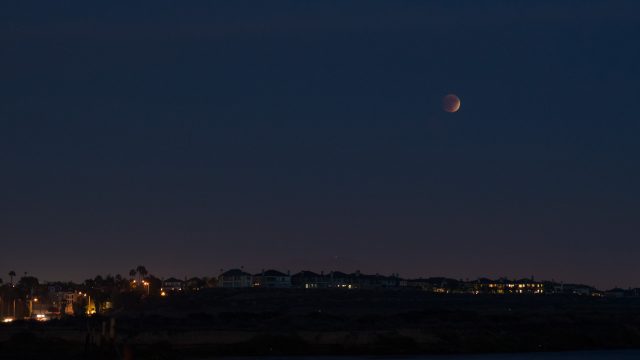 Sun 09.27.15 – This evening just before sunset, I drove over to the Bolsa Chica Wetlands parking lot just off of Warner Ave and Pacific Coast Highway so that I could set up to take photos of the full lunar eclipse that occurred just after sunset and moonrise.

As you can see from my photos, there were bands of light clouds in the eastern sky and that the first part of the eclipse was during the initial phase of the partial eclipse (first photo) and then when the moon was coming into the full eclipse (second photo). I have a photo posted to flickr where the moon has been full eclipse for about 20 minutes when the photo was taken.

The above photos were taken by Ms. Jen with her Nikon D800 DSLR camera and a Nikon 85mm f/1.8D lens, using a tripod and a swiss arca release plate that I hate.

Double click on the thumbnail photos above for the medium and large versions in a lightbox.