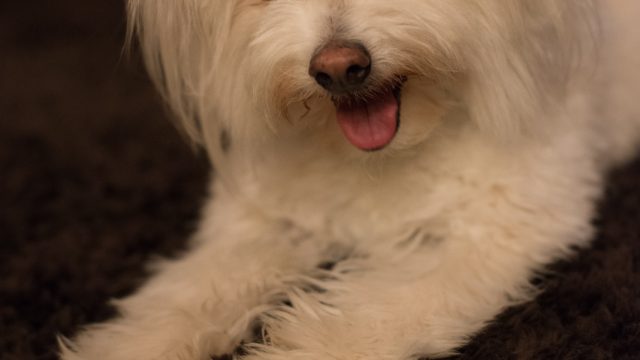 Belle le Cane, you have all seen her photo in one of my photo streams or you have met her in real life. Belle, the supermodel of small white dogs – all long legs, big luminescent brown eyes, soft fluffy white fur, irresistible ears, dewdrop nose in a dark brown pink, obedient, follows you everywhere, and oh so photogenic. You fell in love with her, but like with most hot bitches, there are a few downsides:

1) Belle has a coprophagia problem, in fact she farms the shit. She has been known to line up her own & Scruffy’s poop in the backyard and let it dry in rows before she consumes it if one does not get out there fast enough to pick the poop up and discard it in the trash bin.

2) Belle hates skateboards. She vehemently hates the sounds of skateboard and in-line skate wheels. She will run after the heinous screechy sound offender and attempt to attack. Yes, sixteen pounds of small white super-dog-model running at some gromet punk of a teenager on a wooden board on wheels. Bad combo.

Last night about 8:45pm, I was babysitting Lukas and I needed to go down to my car to get a usb cord to charge my tablet before it ran out of juice and my dearly beloved Kindle app turned off. I couldn’t leave Scruffy and Belle upstairs in Family B’s apartment, as mean little white dog angry presents would have been left. Given that we were just making a quick trip to the curb and back, and both of them are good, grown up dogs who can walk beside me for 30 feet without a leash, off we walked downstairs to the car.

As I opened the trunk of my car, Belle stood on her hind legs and peered in it hoping that the Chuck-It and ball would be brought out. I heard before I saw out of the corner of my eye a skateboarder coming down the middle of the street. It was a tall, thin 20-something young man with a large backpack on, a laptop bag under one arm with the other out in front of him for balance as he was riding one of those incongruently small skateboards that both of his feet could not fit on at the same time.

Hipster-skateboarder with a large backpack and a laptop bag leaving one of the digital agencies or post-production houses at the other end of the street. Poor thing, he probably works really long days trying to prove himself in the dog-eat-dog world of digital Los Angeles, riding his itty bitty skateboard to wherever at nearly 9pm, when a small white madly barking streak runs out into the street to disem-skateboard him.

The kid attempted to evade the mad dog but his feet were too big for the small board and off the board flew into the xeriscaped yard of the across the street neighbor, up went the kid’s feet in different directions as he attempted to clutch the laptop closer and protect his backpack’s contents, and on to his butt he fell in the middle of the street.

Belle sauntered back to me completely happy that the evil wheel noise had ceased and the young man was like a turned over turtle trying to right itself, which he did quickly as I admonished Belle and apologized repeatedly to him. He looked at both of us in surprise, and before I could offer to help, he grabbed his skateboard and ran down the opposite sidewalk, yelling that it was alright and he was alright.

Belle then peered into the back of the car looking for the Chuck-It and two SUVs passed us staring as the street was now clear. The kid rounded the corner and was gone. Belle was deeply disappointed that we were not going to play fetch with the Chuck-It in the dark.