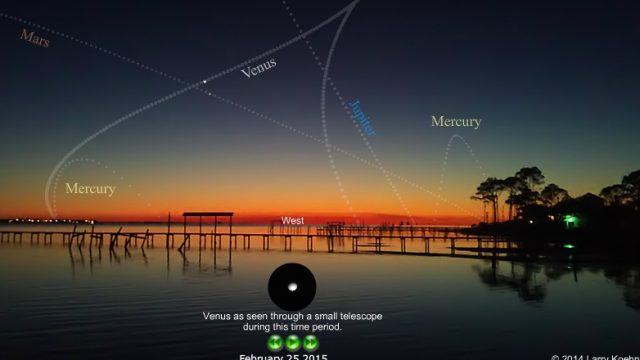 Venus in the evening sky 45 minutes after sunset from December 2014 through August 2015 from LarryKoehn on Vimeo.

Larry Koehn has created a great visual in the form of the above Vimeo video to illustrate where Venus, Mercury, Mars, and Jupiter will be in the evening western sky over the course of the next year! EarthSky has a wee bit more info here.

Here is Larry Koehn’s description of the video:

Each frame represents one day with a total of 238 days from December 10, 2014 through August 3, 2015. The focus of the animation is on Venus, since it is the brightest planet as seen from Earth. Last year, Venus traveled low along the horizon from the northwest to the southeast. This year, our "sister planet" is moving in the opposite direction and making a steady climb high into the sky with it peaking early next summer. From now through August, Venus will come closer and closer to the Earth with it reaching inferior conjunction on August 15, 2015. But before reaching that point, Venus will reach greatest elongation east on June 6. Around May 10th, Venus will be the furthest from the horizon.Venus will be in conjunction with Mercury on January 11th, then Mars on February 22nd, and finally with Jupiter on July 1st. Many of the dates were obtained at In-The-Sky.org.

I have inserted a small view of what you would see if you were to watch Venus through a telescope over the coming months near the green buttons. Venus starts off small and round in December. As the days progress, Venus becomes larger and closer to the Earth, and it goes through various phases of illumination much like the Moon. By the time it reaches August 2015, Venus will have a thin crescent phase.